Renata Gural and the Demetries

On 12 May 2008, Renata Gural, a Polish Gypsy immigrant whose 13-year-old daughter, Bozena, is now married to 14-year-old Bezo, said this in The Daily Mail:

"I'll be the one who decides if my daughter is old enough to marry... JUST BECAUSE I LIVE IN BRITAIN DOESN'T MEAN I'VE GOT TO BEHAVE THE WAY YOU LOT THINK IS RIGHT. I'll live my life the way I want and that includes the way I bring up my kids. I don't care what the neighbours think, or social services. It's not my problem people around here don't understand our culture and values."

"Their marriage is not recognised under British law but there are fears that similar underground ceremonies could become common as the number of gypsies in Britain rises following the eastwards expansion of the EU. Romania and Poland, which have large Romany gipsy populations, have taken a tough stance on such weddings by threatening prosecutions... This has led to concerns that they may move to the UK...

Bozena continues to share a cramped two-bedroom terraced house in East Ham with 14 relatives. Her parents do not make her, or any of her siblings, go to school. Neighbours say the family, who live on benefits and do not pay rent, are terrorising the street... throwing rubbish into neighbours' gardens and spitting on their windows."

Bozena's mother, as can be seen below, is now pregnant with child number 6. 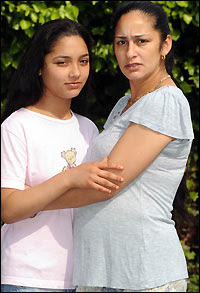 What is it the PC Crowd have been telling us for the last 40-odd years?

Enrichment? Diversity? Plurality? Cohesion? Multiculturalism? All wonderful things they insisted. And anyone who didn't force themselves to believe in the wonderfulness of it all got sneered at, snarled at, demonised and, eventually, criminalised if they didn't keep their disgusting "racist" opinions to themselves.

And, thus, were millions upon millions of Brit-loathing aliens imported into our country.

The know-better, see-further leafy suburbians in parliament and the media, who would never have to live alongside the likes of her, forced the Renata Gurals upon us. THEY did it deliberately. THEY did it knowing that their pet anti-Brits would grab the hand outs and the homes but would NEVER give anything back but criminality, kids and chaos.

That's what THEY rely upon. Criminality, kids and chaos are just what a malign New World Order elite requires in its never-ending war upon the decent.

"Behind his large mahogany desk decked with the blue-and-yellow flag of the European Union, the mayor of the Romanian town of Tandarei gives a weary sigh as he is shown a [I]Daily Mail [/I]picture of 21 newcomers to Britain.

'Yes, I know most of them,' says Vasile Sava after scrutinising the photograph taken 1,500 miles away in Slough, Berkshire.

'They are the Demitrie... Of course, they are with you now. Six hundred people have left our town and more will go to your country… When these people get rich they send their relatives money to build fancy homes here with your English pounds…

HERE THEY GET £5 A MONTH IN CHILD BENEFIT AND NOTHING MORE. IN YOUR COUNTRY THEY GET MORE HELP FROM THE STATE AND THAT IS WHY THEY GO THERE.'

The streets are neat and free of litter, but they turn quickly into dusty lanes where gypsies have made their homes for 300 years. The exodus to Britain from Romania and Bulgaria began on January 1, when the two former Communist nations became EU members and won the right for their citizens to live in the UK.

The Romanian government reported last week that 200,000 from the two countries have left this year - 50,000 a month - enough to set up a new city the size of Southampton. NO ONE - INCLUDING THE GOVERNMENT - REALLY KNOWS HOW MANY THOUSANDS MORE MIGRANTS FROM THE EX-SOVIET BLOC ARE IN BRITAIN BECAUSE THE OFFICIAL WHITEHALL TALLY IGNORES THE JOBLESS, THE SELF-EMPLOYED AND THOSE WORKING IN THE BLACK MARKET.

The result is that councils all over the country are struggling to cope. Hospitals are overburdened, schools are teaching hundreds of pupils with little English and housing departments say they are running out of money.

Slough, where 100 OF THE DEMETRIE FAMILY FROM TANDAREI HAVE ARRIVED SINCE JANUARY, is no exception. By the beginning of May, 88 Romanian gipsy children, apparently without parents, had turned up at the civic centre.

Some are only ten, others in their early teens are pregnant or holding babies. Under British laws all unaccompanied minors - wherever they are from - have to be cared for by the council and given state benefits. To date, this has cost Slough £200,000. By the end of the year it will be nearer £1million. And that's if not a single further child turns up.

But this is as likely as a piece of heather making a wish come true, according to 39-year-old Marin Octavious, who lives in Tandarei with his wife and ten children. The oldest is 22 and the youngest was born just before Christmas.

Jobless and - he says - penniless, Marin is one of the elders of the gipsy community and in a perfect position to explain why so many are heading for Britain, because he has tried life in London himself. In 2002, he smuggled himself and his family in a freight train across Europe, a journey he says which meant hiding in darkness in a crate for nearly a week.

'Even my little children had to stay quiet until we arrived in Tottenham,' he says. He would have stayed, claiming political asylum - citing racial discrimination in Eastern Europe because he is a gipsy - but his claim was rejected.

'I liked life in your country… YOUR GOVERNMENT GAVE MY FAMILY A FLAT AND £720 A MONTH IN BENEFITS. THEY WERE GOOD TIMES… LIKE OTHER GIPSY FAMILIES LIVING THERE, MY FAMILY EARNED EXTRA MONEY BY BEGGING IN OXFORD STREET.'

However, he did bring back some money. He now has a new motorbike and a house in Tandarei.

'OF COURSE, THAT'S WHAT OUR PEOPLE DO WHEN THEY GO TO YOUR COUNTRY… ONE DAY I WOULD LIKE TO GO BACK.'

If he does he will not be alone. No one knows that better than Dan Cristescu. He is a trade union president in Romania and was sent to study at Ruskin College, Oxford, by his union. For six years, on his return to Bucharest, he ran a committee to help Roma families go to school, train for work and stop begging on the streets…

'But it is only fair to say THEY HAVE BEEN A PROBLEM FOR US AND NOW IT IS YOUR PROBLEM… OF COURSE, THEY WILL BE AWARE OF YOUR GENEROUS BENEFITS SYSTEM. SINCE THE EARLY 19TH CENTURY WHEN THEY CAME TO EUROPE FROM INDIA, THEY HAVE LIVED BY ASKING OTHERS FOR MONEY… MOSTLY THEY LIKE TO LIVE BY BEGGING. IT IS THEIR TRADITION AND SOME ARE VERY RICH PEOPLE.

Fathers, maybe only 45, have ten children. Those children will have dozens more children. There are rumours that beggars in London are getting £250 a day. If you have 50 members of an extended family with outstretched hands, just count that up.'

Cristescu's words are harsh yet they ring true. Only last month there were police reports of organised gangs of Roma boys, some only ten and wearing primary school sweaters, begging in Walthamstow, East London. They were accompanied by pregnant women and watched over by male minders who collected the takings.

On the rutted streets in Tandarei this would come as no shock to Katerina, a grandmother, and one of the few members of the extended Demetrie family left in the town. I find her in a bungalow in the heart of the gipsy community. It is unlikely she will be here for long. Only recently she was living in Slough with her daughter and son-in-law and has returned for a funeral…

'I lived with my relatives and there were 15 in our house. Of course, those that have been there longer or those with young children did get money from the council or the government'…

Katerina will return to Slough when she can afford the £100 fare with a company called Atlasib, which runs two coaches carrying 90 Romanians a week from Bucharest to London. Most of the travellers, says the company, buy a one-way ticket… As for Katerina, she asks me if I can help finance her return to England. When I decline, her mood changes swiftly.

Up the street there is a warmer welcome from a man who gives his name as Mr Rada, standing outside an extraordinary house. It is just the kind of 'monstrosity' that the mayor would like to tear down. The neighbours say the four storey house… was built with 'English money'.

'I call it my English castle,' says Mr Rada, who lives there with his wife and ten sons…

Carmen Petcu, 30, plans to join Chivu, the father of her one-year-old baby, Darius, next month in Manchester… the pretty redhead explains:

'My partner's parents retired and went to live in England six years ago. They were given benefits and a council house'."

Pictured below are just 21 members of an extended Romanian Gypsy family of 80+, now living in council accomodation and claiming benefits in Slough, Berkshire.

It is war, ladies and gentlemen.

Our own politicans are at war with us. They know it; the media knows it; the PC Crowd knows it, the international financiers and multinational corporation owners know it; the wallet-stuffing jobsworths, who police and administer the unspoken war, know it as do the Demetries and the Renata Gurals.

If all of these are well aware of the horror they have visited upon the British people in recent times, how come the average British voter still remains determinedly in the dark?

On 14 July 2009, New Labour’s "Cohesion" Minister, Shahid Malik, said this in The House of Commons:

“FAIRNESS DOES NOT MEAN TREATING EVERYBODY EQUALLY”. More...

Malik commented as he did in a debate about the contrast between the preferential treatment doled out to the Gypsy and Traveller communities, which Malik thought was right and just, at the expense of local people.
Posted by SECRETS at 18:15