On 3 November 2009, the New Labour MP, Kim Howells, wrote the following in The Guardian:

“Seven years of military involvement and civilian aid in Afghanistan have succeeded in subduing al-Qaida's activities in that country, BUT HAVE NOT DESTROYED THE ORGANISATION OR ITS LEADER, Osama bin Laden. Nor have they succeeded in eliminating al-Qaida's protectors, the Taliban. THERE CAN BE NO GUARANTEE THAT THE NEXT SEVEN YEARS WILL BRING SIGNIFICANTLY GREATER SUCCESS…

It would be better… TO BRING HOME THE GREAT MAJORITY OF OUR FIGHTING MEN AND WOMEN and concentrate on using the money saved to secure our own borders, gather intelligence on terrorist activities inside Britain, EXPAND OUR INTELLIGENCE OPERATIONS ABROAD, CO-OPERATE WITH FOREIGN INTELLIGENCE SERVICES, and counter the propaganda of those who encourage terrorism…

WE WOULD NEED TO REINVENT OURSELVES DIPLOMATICALLY AND MILITARILY. Treaties and international agreements would have to be renegotiated. In particular, relationships with our Nato partners, ESPECIALLY WITH THE AMERICANS – our most trusted and valued allies – would alter fundamentally.

LIFE INSIDE THE UK WOULD HAVE TO CHANGE. THERE WOULD BE MORE INTRUSIVE SURVEILLANCE in certain communities, MORE POLICE OFFICERS ON THE STREETS”.

Would it just be the Muslims you’ve been importing for more the forty years now that the boys-in-blue and the Thought Police would be watching, Mr Howells?

Or would the native population fall foul of your intrusive surveillance as well. Thought so. Howells continued:

“If media reports are true, the British public is becoming increasingly hostile to the notion that any of our service personnel should be killed or wounded in support of DIFFICULT OUTCOMES AND FLAWED REGIMES IN FARAWAY COUNTRIES”.

The 'British public' has always been 'hostile' to the predictably 'difficult outcomes' foist upon them by their parliamentary betters, Mr Howells. Seven years too late such as yourself have decided to take notice of that hostility. Howells continued:

“THE SIZE OF THE AFGHAN CONFLICT MIGHT GROW, RATHER THAN DECREASE… I doubt whether the presence, even of another 40,000 American troops… will guarantee that the Taliban and their allies will no longer be able to terrorise and control significant stretches of countryside, rural communities and key roads. Recent attacks in Kabul and other centres suggest that THE PRESENT BALANCE OF TERRITORIAL CONTROL IS AT BEST LIKELY TO REMAIN – OR, MORE LIKELY, TO SHIFT IN FAVOUR OF THE TALIBAN…

I had hoped that by now a degree of stability might have returned to Afghanistan. I ASSUMED, WRONGLY, THAT A DESIRE AMONG ORDINARY AFGHANS FOR PEACE WOULD PREVAIL over the prospect of continued war and the spectre of being ruled by a tyrannical theocracy in one of the world's poorest and most backward countries…

In a Commons debate some months ago, I expressed the view that a deadly combination of ANTI-DEMOCRATIC ISLAMIC FUNDAMENTALISM, CORRUPTION AND THE PROXIMITY OF SAFE PAKISTANI HAVENS FOR TERRORISTS ALL MILITATED AGAINST THE NOTION THAT WE WILL BE ABLE TO CONTINUE CONVINCING THE BRITISH PEOPLE THAT THEY SHOULD PREPARE THEMSELVES FOR A ‘30-YEAR’ CAMPAIGN.”

The 'anti-democratic Islamic fundamentalism, corruption and the proximity of safe Pakistani havens for terrorists' were all there in 2001, Mr Howells. You know, when you and the other New Labour and Tory warmongers voted to go slaughter the Afghans. Howells continued:

“They are the views of someone WHO SUPPORTED THE DEPLOYMENT OF OUR FORCES TO AFGHANISTAN. I was convinced that, given the opportunity offered to them by the UN-led intervention, the Afghans would display the resolve, skills and courage to tackle the problems that have blighted Afghanistan for so long".

The 'problems that have blighted Afghanistan for so long' are the foreign powers that keep on invading their country and blowing their world to bits. The Afghans have 'displayed' the same 'resolve, skills and courage' against the coalition forces that they’ve shown numerous times during the last three centuries against all the previous invaders of their country.

Thing is, Mr Howells, as I've already said, the 'outcome' was as predictable in 2001, when you voted to make war upon them, as it is now. The Russians couldn’t beat them. We couldn’t beat them when Britain was the most powerful nation on earth. The clue was in the 'Islamic fundamentalism, corruption and the proximity of safe Pakistani havens for terrorists' , Mr Howells. Pity you didn’t pick up on it back when it mattered. A lot of innocent people would have been alive to day if you had.

“Sooner rather than later A PROPERLY PLANNED, PHASED WITHDRAWAL OF OUR FORCES FROM HELMAND PROVINCE HAS TO BE ANNOUNCED. If it is an answer that serves, also, to focus the minds of those in the Kabul government who have shown such A POVERTY OF LEADERSHIP OVER THE PAST SEVEN YEARS, then so much the better."

Who installed the 'Kabul government?'

The Bushes, the Blairs, the bought media and the US-Jewish Neoconservatives who instigated and guided the whole process. That’s who.

Kim Howells is a longstanding member and a former Chairman of New Labour Friends of Israel.

He is also a former representative of the Communist Party of Great Britain.
As was his father. Howells was in charge of the NUM's Pontypridd office during the miners' strike. Taxi driver David Wilkie was killed during it.

Two striking miners dropped a concrete block off a bridge onto his taxi as he took a non-striker to work. On being told of the incident, Howells immediately destroyed a large number of relevant papers. He was afraid the cops might raid the Union's offices and unearth something that might be used in evidence against him, one presumes.

Howells was a Minister of State at the Departments for Transport and Education and Skills in Tony Blair's government. He now chairs the Intelligence and Security Committee.

In February 2009, the former Communist pictured below was appointed to the Privy Council. 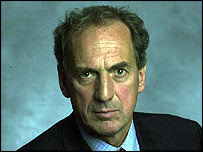