To whom it may concern:

In a case lodged against one Mark Farquhar at Edinburgh Crown Court my Twitter pseudonym @ironwand is mentioned. Here is the sentence in question:


"One such posting (from sparky155@BOOKEInBLUE) was to @ironwand the text of which read 'truth telling can be dangerous hence why they gagged me...'." 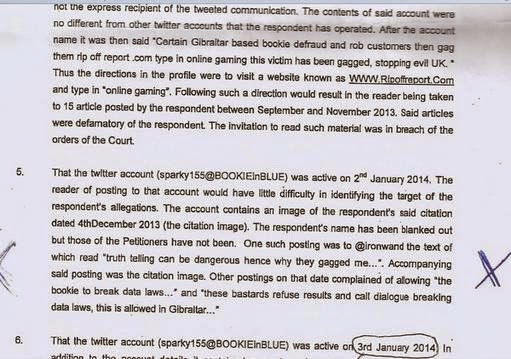 I've searched Twitter for this tweet and it cannot be found. If you wish to check for yourself, go here:

Enter the dates from 2 January 2014 to 3 January 2014 and then enter any combination of terms, for example, the words "hence" and "gagged," into the all of these words box. The tweet isn't there.

I also tried to discern if any conversation at all took place via my own URL typing in the words Twitter, @ironwand and @BOOKIEInBLUE but, once again, nothing was forthcoming.

I suppose it's possible that such a conversation did take place but, if so, there is no longer any evidence of it. Unless, of course, Twitter can resurrect it somehow. I have no personal recollection of the cited conversation.

Anyway, I'm not sure if the above will be of any help to Mr Farquar in his dealings with William Hill but I do know that part of the document cited will be irrelevant to any court case as it does not appear to exist.

Although I cannot imagine how I may be of further assistance, if you wish to speak to me you can do so via @ironwand at Twitter.

ironwand
Posted by SECRETS at 22:34